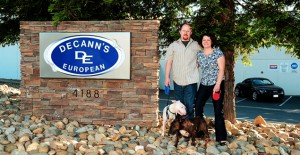 Decann’s European opened in August of 2007. Our philosophy is to provide excellent service and to treat each customer like a member of our family. Thank You Our staff has a wide variety of knowledge spanning the European, Japanese and American manufacturers. Owner Decann Hawley is a certified BMW technician with over a decade of experience in repairing not only BMW, but Mercedes, Audi, Volvo and Volkswagen.

Automobiles are in his blood. He actually began working on vehicles before he had a driver’s license. His first vehicle was a 1968 Chevy pickup which, incidentally, he still owns.

A native Californian he was born in Riverside and raised in Chester. He attended Lassen High School for the auto department and received a scholarship to attend Universal Technical Institute where he took the specialized BMW STEP program. Being a desired graduate by BMW dealerships, upon graduation he had the choice of several opportunities, finally choosing Allison BMW in Mountain View, CA. As he preferred a small town atmosphere, he relocated to Auburn after two years in the Bay Area. After working at an independent European specialty shop for a year, he landed at Roseville BMW. Six years later he decided it was time to offer his exceptional skills in a more customer-oriented environment. Thus, Decann’s European was born.
Decann stays pretty busy operating the shop, but when he has free time, he enjoys reading technical journals, learning about the latest automotive repair techniques, outdoor sports and raising Mandy and Cooper, his two bull terriers.

Jessica, Decann’s wife and co-owner, has been involved with the business since August of 2008. She helps Decann keep the business organized and running smoothly. The couple was introduced by her sister who was a service advisor at Allison BMW when Decann was a mechanic. After their courtship, they were engaged on top of Mount Fuji and then held their wedding ceremony at Venezio Winery in Pilot Hill. Jessica is also a physical therapist assistant, so when she is not doing bookkeeping, marketing and attending Chamber of Commerce meetings for the shop, she works for El Dorado Physical Therapy.

Decann and Jessica have two adopted dogs from Bull Terrier Rescue, Mandy and Cooper, and they enjoy being able to support PAWED (People for Animal Welfare in El Dorado County). 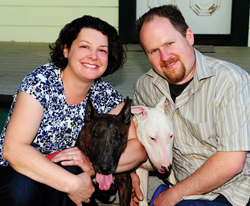 Mandy joined the family in 2005. She was placed with a foster family in Cameron Park through the Bull Terrier Rescue organization. Her past is not very clear, but she enjoys snuggling on the couch with a warm blanket, laying in the sun and playing tug of war. She’s a very laid back and sweet little princess … a perfect first dog for the Hawley’s. She has trained the couple very well.
Cooper has been with the Hawley’s since 2009 … another rescue from the Bull Terrier Rescue. He is a very affectionate and bouncy little guy who loves his daily walks, snuggling with anybody and anything, and meeting new friends. Sometimes he won’t even bother to come out of the warm, comfy doghouse that he shares with Mandy in the dog run at the shop when customers come by. At other times he will greet one with an enthusiastic come and play with me bark. He is deaf, so he takes his cues from Mandy a lot.

The Best Service for the Best Cars